A gross of beekeepers

Along with 143 other beekeepers, I spent the only nice day for weeks hanging out with someone else's bees! I went to the Massachusetts Beekeepers Association Annual Field Day. This was held in Deerfi 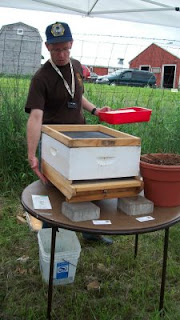 One of the things I wanted to learn about was using fewer chemicals in my hives. The most common chemicals found in a hive are those added by beekeepers. Delicately balancing the use of chemicals and reducing the mites, beetles, and harmful critters is critical to the survival of bees and us.

Ed K, from Norfolk County, pictured here uses a great method for helping his bees get rid of mites. He shakes powdered sugar in his hives. Yep, the same old stuff you dust on your cookies, we dusted on bees. It takes about 15 second and doesn't require the removal of honey from the hive.

The treatments I used last year are soft,gentle and even in CA are considered organic. Nonetheless, they take three weeks and I have to remove the honey. Sheesh - this was soo much easier. (Yes I glossed over the other three steps in the process, but they are a bit esoteric for non-beek

eepers.)
One beekeeper brought a drone comb frame. This was amazing to see because they were emerging in waves!

What really made my day was the final talk I went to taught by Rick Reault. He was the source of Red, our beautiful queen. After watching him -and I was so enthralled I forgot to take pix!- I realized that he is the kind of beekeeper I want to become. He was so in love with the bees, he was calm, he moved so gracefully, and he was incredibly knowledgeable.

Rick explained the three clues that a hive is getting ready to swarm - and I'd only known about one before! He also had an intuitive, simple way to tell the age of larvae. During the workshop, he marked the queen and it was so simple! I thought the only way to do that was to catch the queen in a special grabber that looks remarkably like a hair clip. Not Rick - he just held the queen still for three seconds and touched her with the marker.