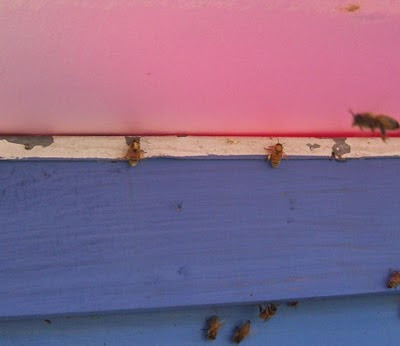 Today was a spectacular bee day. The girls were flying like it was the middle of summer - busy as, well bees. I popped out just to get my fix of watching them and I was rewarded with loads of beautiful bees.
I am really quite shameless. I love my bees and I just like to go and watch them. If I had an observation hive, where I could watch them inside, I would never leave.
Check out the photo. The bee on the left has been visiting a skunk cabbage and the other bee has been either to pussy willow or maybe an early maple. The skunk cabbage visiting bees had pollen on their backs and a few had pollen on their butts. I tried so hard to get a picture but the bees were just too busy to slow down for a photo op!
After hearing so many other beekeepers share stories of heavy bee losses this winter, I just want to go an hug each and every bee!
Catch the buzz!
Posted by Michele at 12:22 PM No comments:

I took a quick look at the girls today - just a howdy-do. I didn't open the hives because it is still pretty chilly - only about 40'. I wasn't expecting much in the way of activity.
Joy and Sun's hives were quiet, snuggling in the chill.
Ruby's hive on the other hand were out and had been gathering pollen! I am going to guess pussy willow pollen. When a bee gets pollen from skunk cabbage, they get pollen on their backs - it is pretty cool. Check out pictures from last year. These bees only had pollen in their pollen baskets.
Whoo, hoo - this means we have babies!
Posted by Michele at 12:11 PM 1 comment:

I went to a monthly beekeepers meeting on Saturday and have been in a stew ever since. The number of people reporting dead hives from this spring was quite high. It had been a while since I had checked the girls, so I've been worried.
I have spent a ton of time fretting about the girls starving and trying to make good bee candy. Bee candy is not made out of bees, but is a sugar/corn syrup mixture that you boil and stir like crazy to make in to a hard candy.
Well that is what is supposed to be anyway. Mine last two batches I just didn't agitate quite enough so it became an oozy mess at room temperature. Sigh.
Yesterday I decide to stop spending time fretting and spend that energy actually feeding the bees. It was a bit chilly to be mucking about in the hives too much, but I was so done worrying.
So finally here is the report:
The hives are FINE.
I did take a picture of some of the bees, but I realized that this time of year the hives look terrible. They so need to be painted and the winter crud scraped off. So I am not showing you my winter crud right now.
Ruby's hive is the only one that had eaten the sugar I put on in February, so they were the only ones who got sugar. Joy and Sun's girls have only eaten about 20% of the sugar. I gave all three hives a pollen patty. Pollen patties are just squished up pollen and contain a lot protein the bees use to feed babies. I don't normally give pollen, but after a look around the area this weekend, I found two, yes TWO skunk cabbage flowers and that was it. Normally at this time of year, I can't count the flowers. Pussy willows and maples are sporting swollen buds, so spring is coming.
Really. I promise.
Posted by Michele at 9:56 AM 6 comments:

I love Bee School - I took beekeeper school for the first time four years ago. It seems like yesterday. I love talking with others about their hives or the hives they want, learning about new methods, and my favorite class is about the pollen and nectar sources in the area. Guess I am a sucker for pretty pictures of flowers.
Since I am no longer considered a new beekeeper, I help out. With about 200 people at the class, many hands are needed to get the registration moving smoothly.
If you want to join in the fun, it is not too late to start. The information is here.
Beeschool is also a sure sign of spring. And I can't wait for a real taste of spring!
Posted by Michele at 6:19 AM 1 comment:

We have a WINNER

I have contacted the winner, Audra and will be sending her package out this week.
Thanks to everyone who started following Blue Hive Journals and as always, thanks to those who have been with me since the beginning!
~Me and the "girls"
Posted by Michele at 9:49 AM No comments: