It is unusually warm here on Christmas day so I though it would be an excellent time to visit the bees and see what they were up to. I also planned to drop off a Christmas gift. I snuck in a sugar patty in each hive. 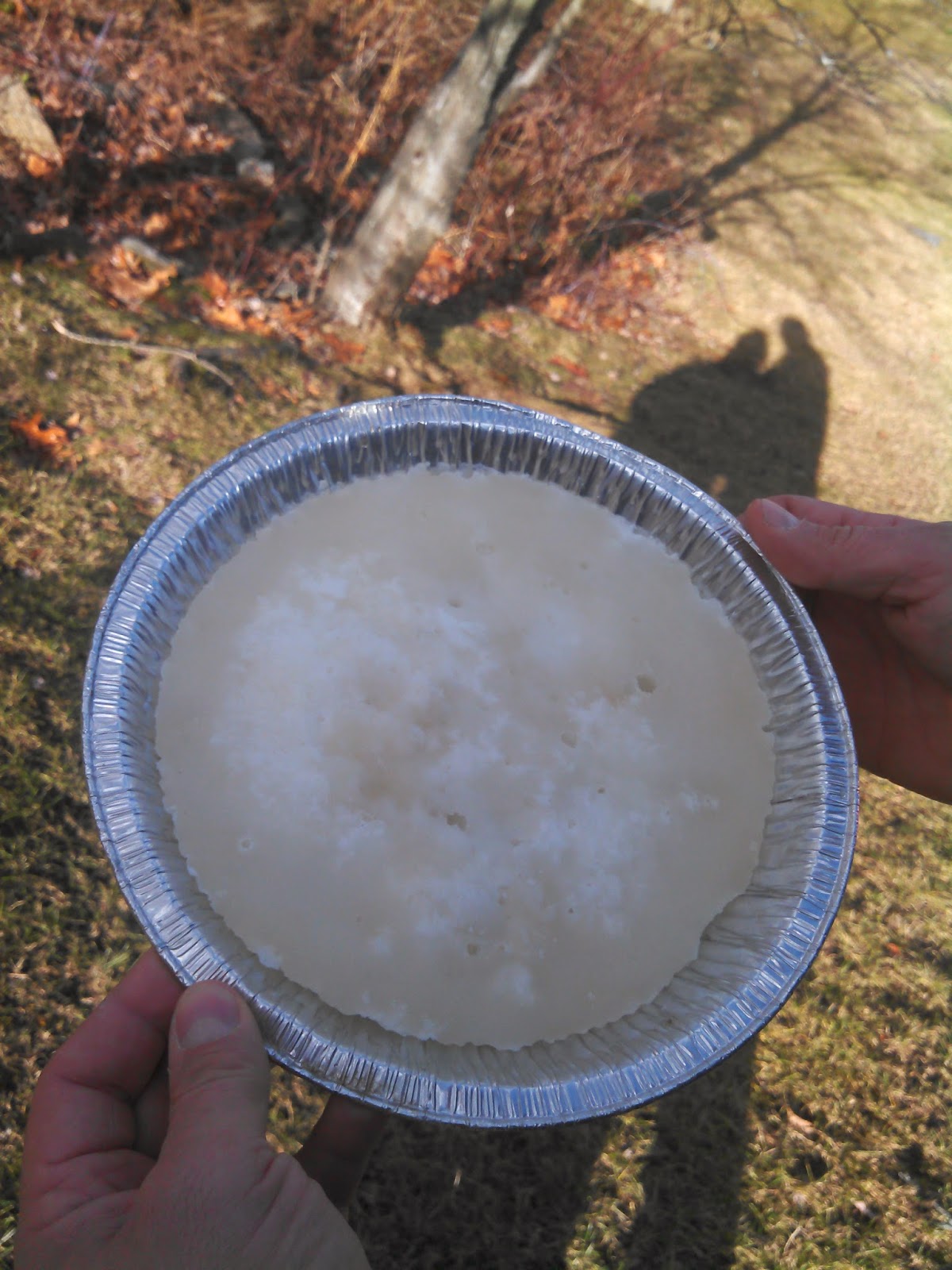 The bees were enjoying the sunny weather. They were very curious but not aggressive in the least. Often I find the bees in the winter a bit unpredictable. They are much easier to work when they have been outside. Bees don't pee or poop in their hive so on sunny days when the temperature gets above 50 degrees, they take elimination flights. These elimination flights allow them to relive themselves away from the hive. The warmer it is, the farther away they go. 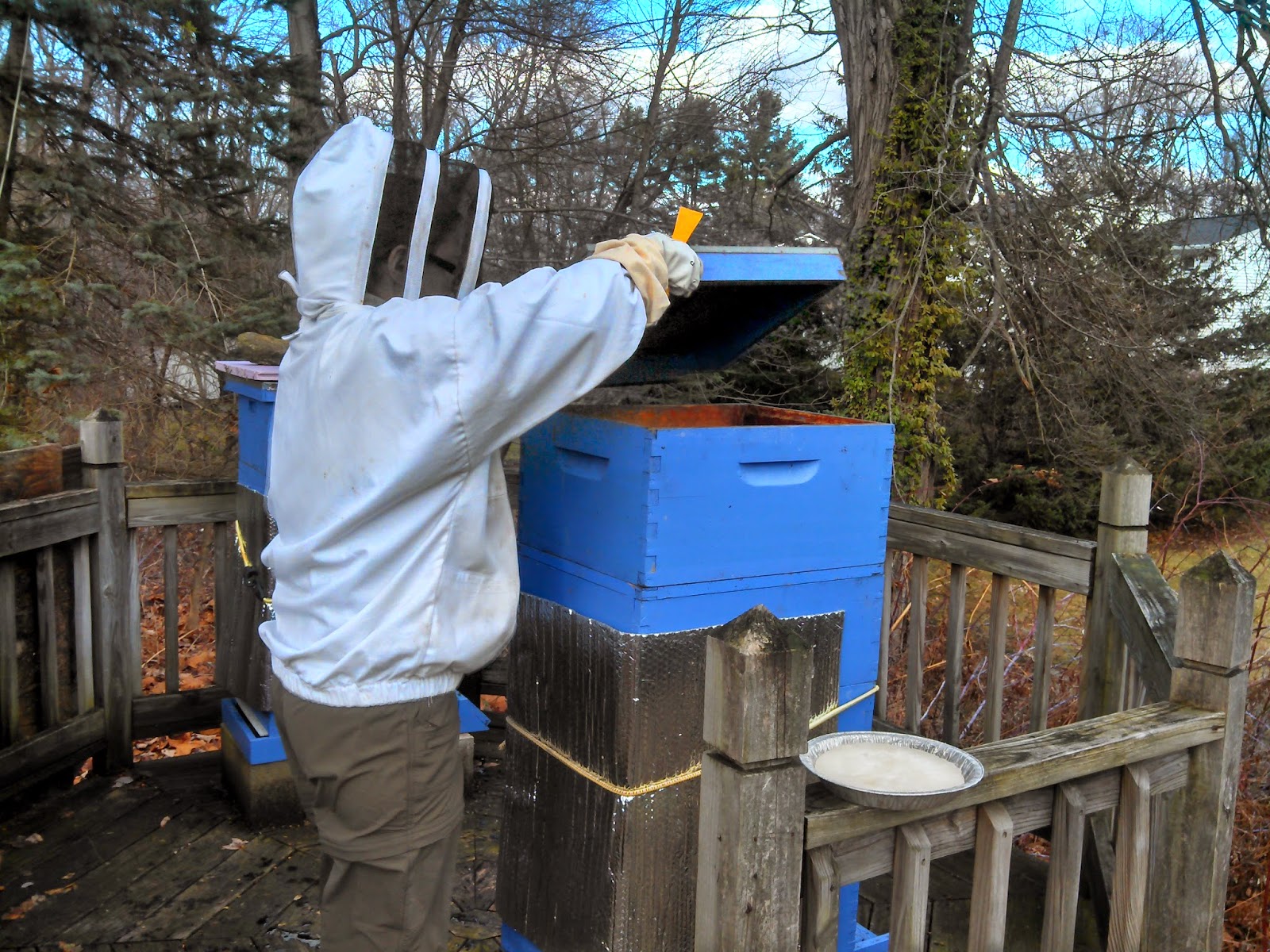 I dropped one hive down a box but the other hive still had a couple of partial frames of honey in the attic so I left it and put their sugar patty up top just on the edge of the hole. 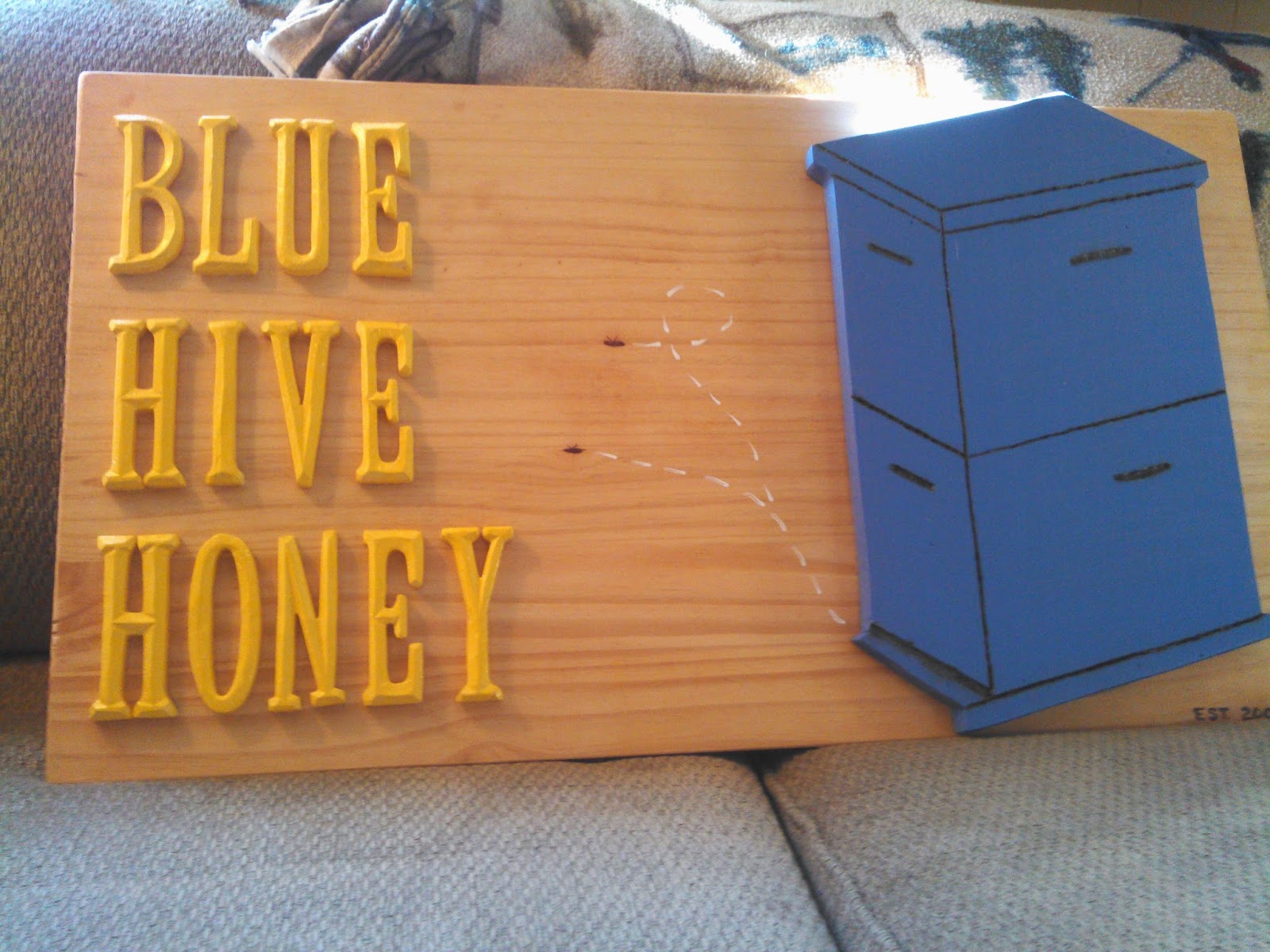 The bees were not the only ones to get presents today. I got some new hive tools, a nifty all wood jar feeder, an new honey super complete with frames, and a nifty sign from from my husband (who also took pictures in the bee yard). 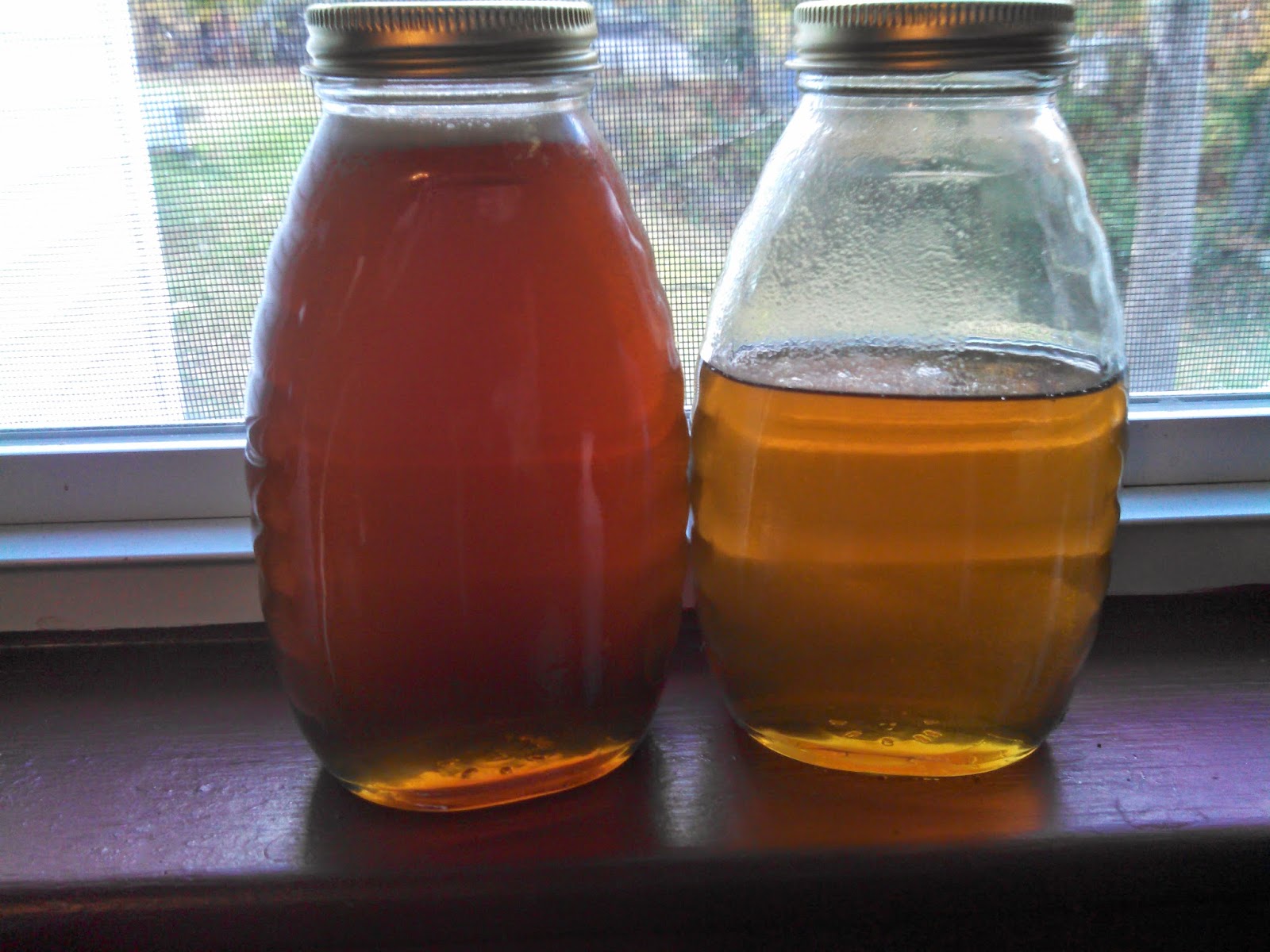 I am always amazed at the difference between summer and fall honey. This is all we have left of our summer honey on the right and the darker, bolder fall honey is on the left. It was a slim harvest for us. The bees in one hive just didn't produce much at all this year while the other was nicely productive. 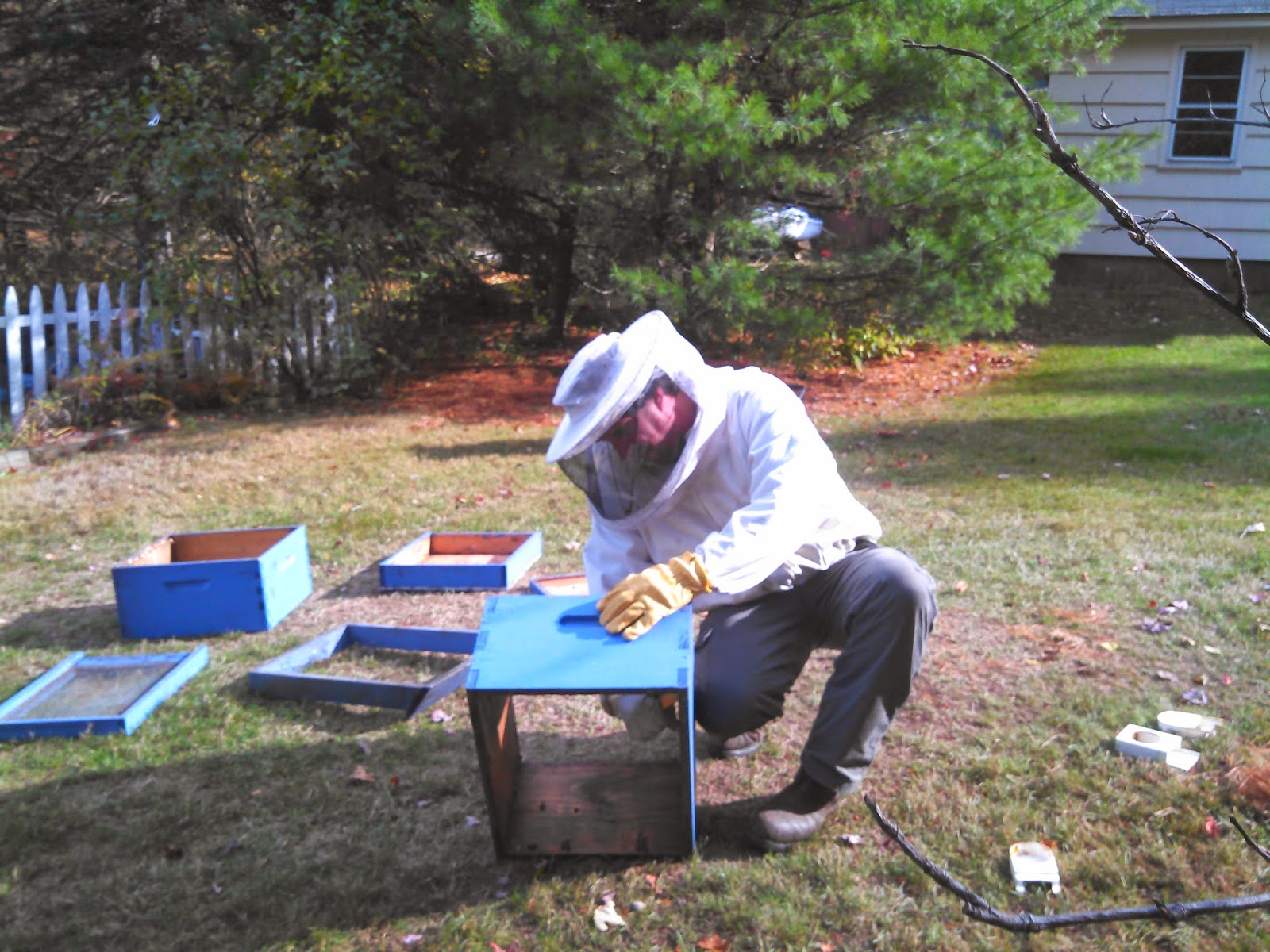 My husband loves to help with harvest even when that means he's on cleaning duty. Here he is cleaning out a box that will go into storage this winter. 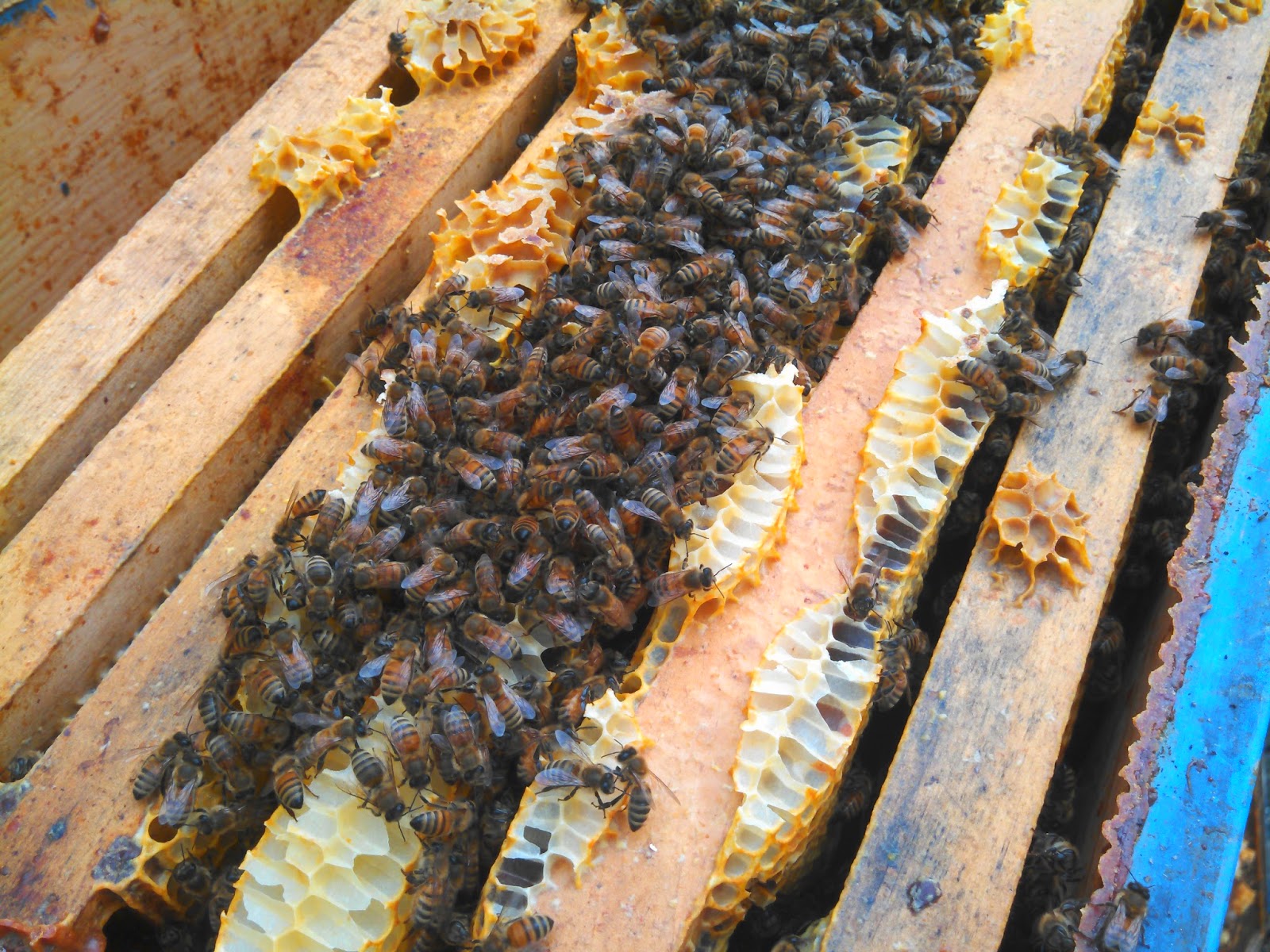 Our productive hive really liked making wax. Normally we keep enough frames in the hives for the bees to fill with honey, but apparently I left an open spot. It wasn't empty for that long. The bees made a frame to fill the space. These bees are quite dark and that is generally true of all the bees in this hive. Some of the daughter workers have virtually no yellow on them anywhere. This is in contrast with our other hive where this fall's new bees are very golden in color.

Typically beekeepers assume that darker bees are more temperamental. In this case my experience belies that notion. These bees are lovely to work yet they also produce good amounts of honey.

99 Bulbs in the ground 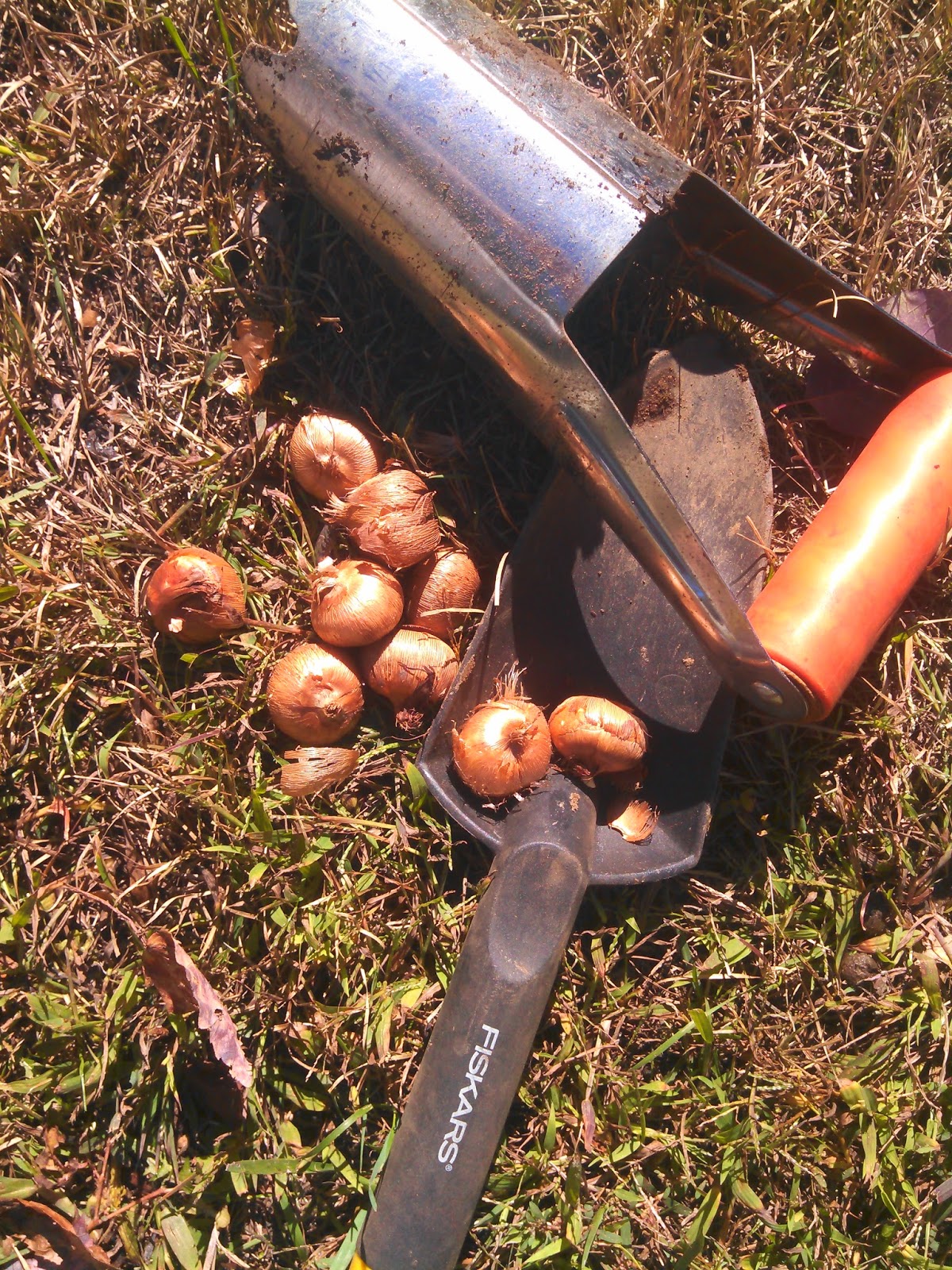 It has been a busy weekend here. I planted 99 bulbs in one afternoon. Why 99 and not 100?  I planted three packages of bulbs - 50 crocuses, 25 late tulips and 24 early tulips. The folks who work on the packaging really make me crazy with their inconsistent numbers of bulbs but I am sure I won't care in the spring when there is a riot of pastel colors in the front yard. Some of the bulbs were planted in beds next to the door. This is the first time we ever planted bulbs there. Let's hope the chipmunk doesn't notice!

Crocuses provide a fair amount of pollen for being such a small flower. Tulips always give me pause in the spring. Their pollen is often black or dark gray. So my first instinct is to think the bees have moldy honey before I remember that tulips are in bloom. 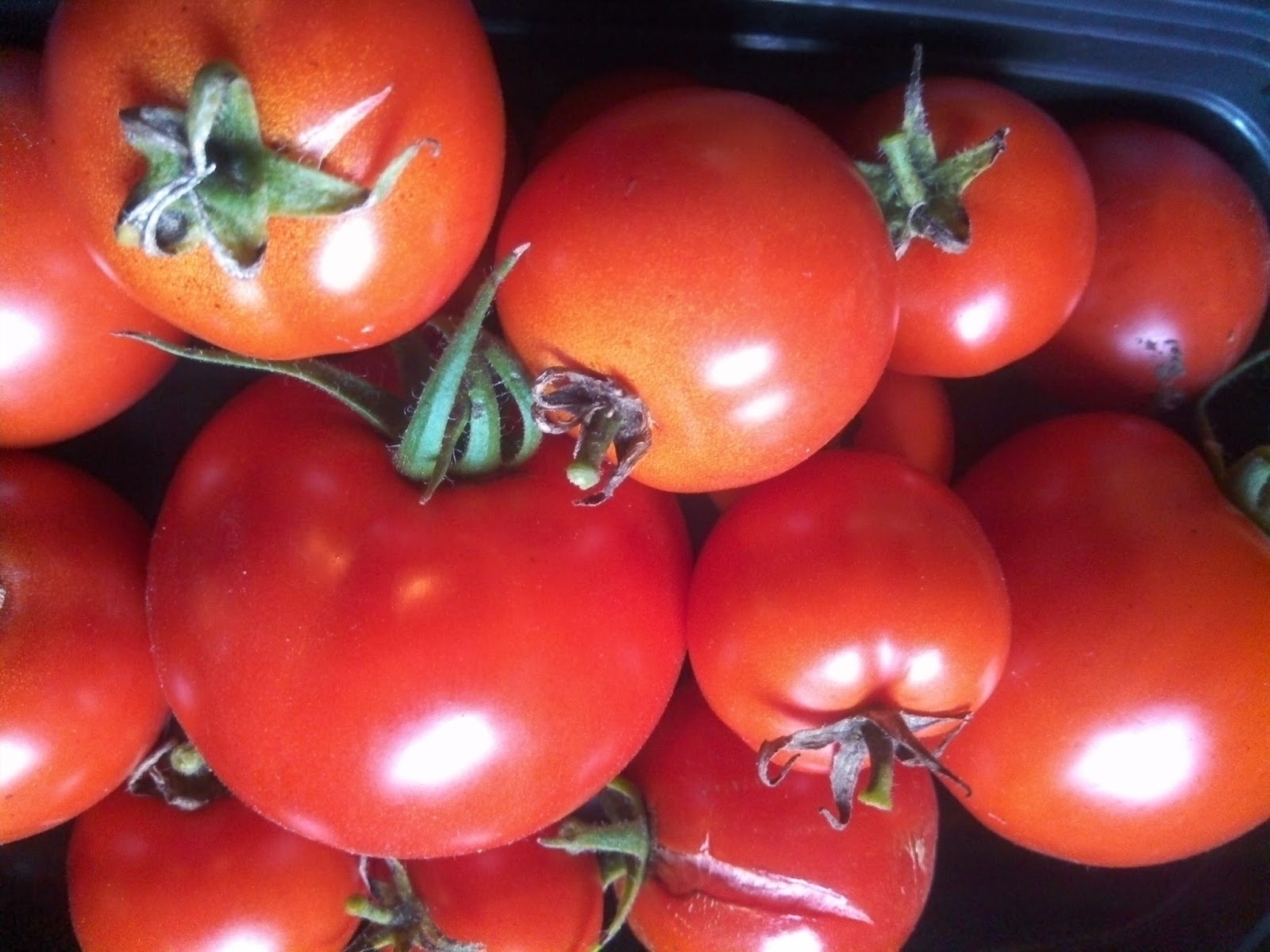 We also harvested the last of the tomatoes. The tomatoes cracked me up this year. My daughter brought home two tomato plants labeled yellow pear. These beauties are Early Girl - no yellow or pear about them.

The final fall preparations are underway. The bees are still bringing in pollen although the cooler days have brought fewer and fewer bees out every day.

At the beginning of fall we have our last flower of the year blooming in our animal garden. 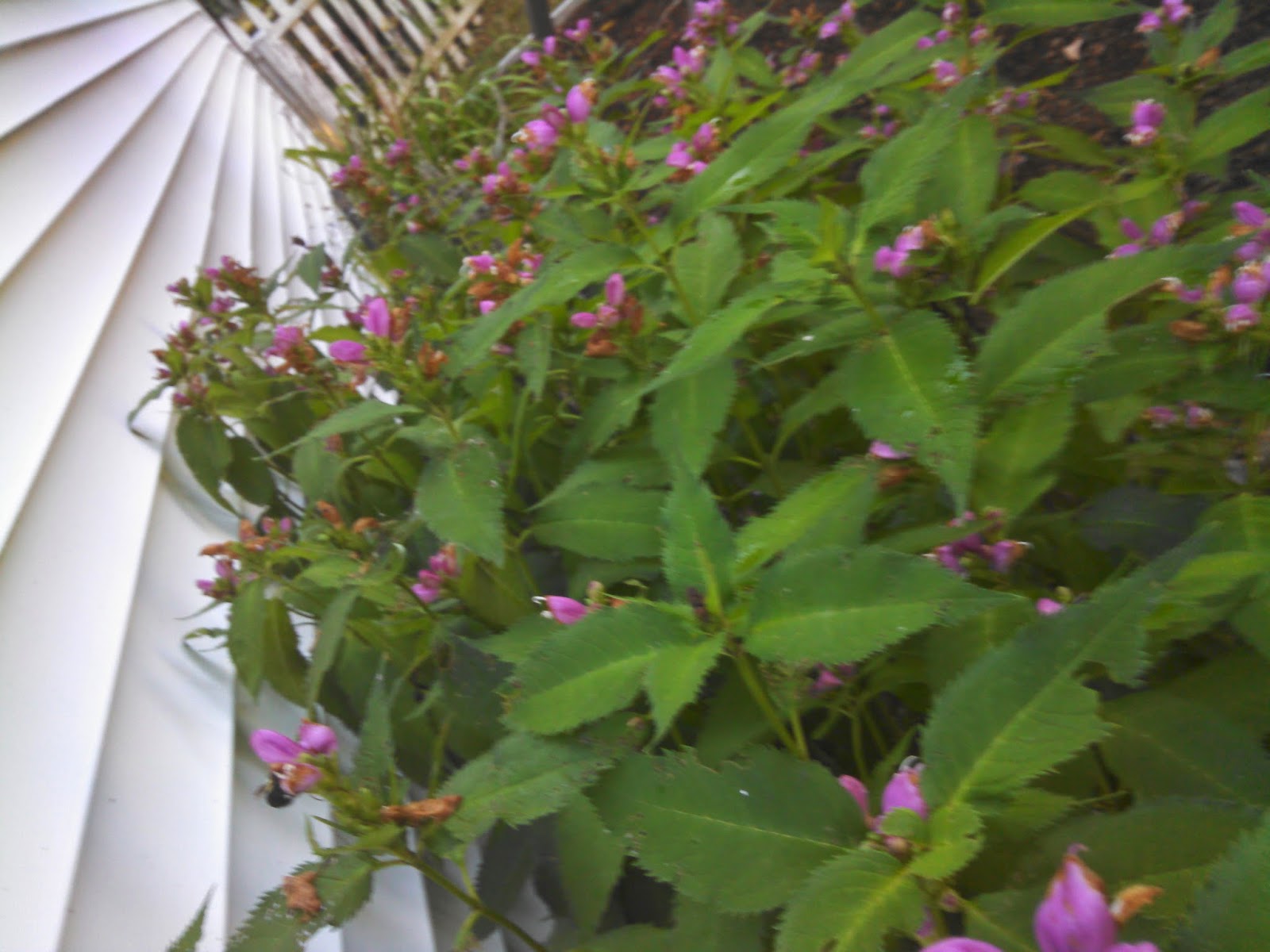 Turtle head grows about three feet tall and we have it growing and thriving in what seems to be entirely the wrong place in the garden!  Everything on the web says put this in shade and damp soil so we have it growing in a sunny dry location. Go figure.

Bumble bees enjoy this flower and their bums seem to vibrate with joy as they climb into the mouths of the "turtles" and suck up the nectar.

We have a few themed gardens. In the Animal Garden every plant in the little spot has an animal name. Summer brings the Tiger Lilies to bloom and late summer we have lambs ear. Their flowers are purple-ish with a fuzz all over just like the soft leaves. 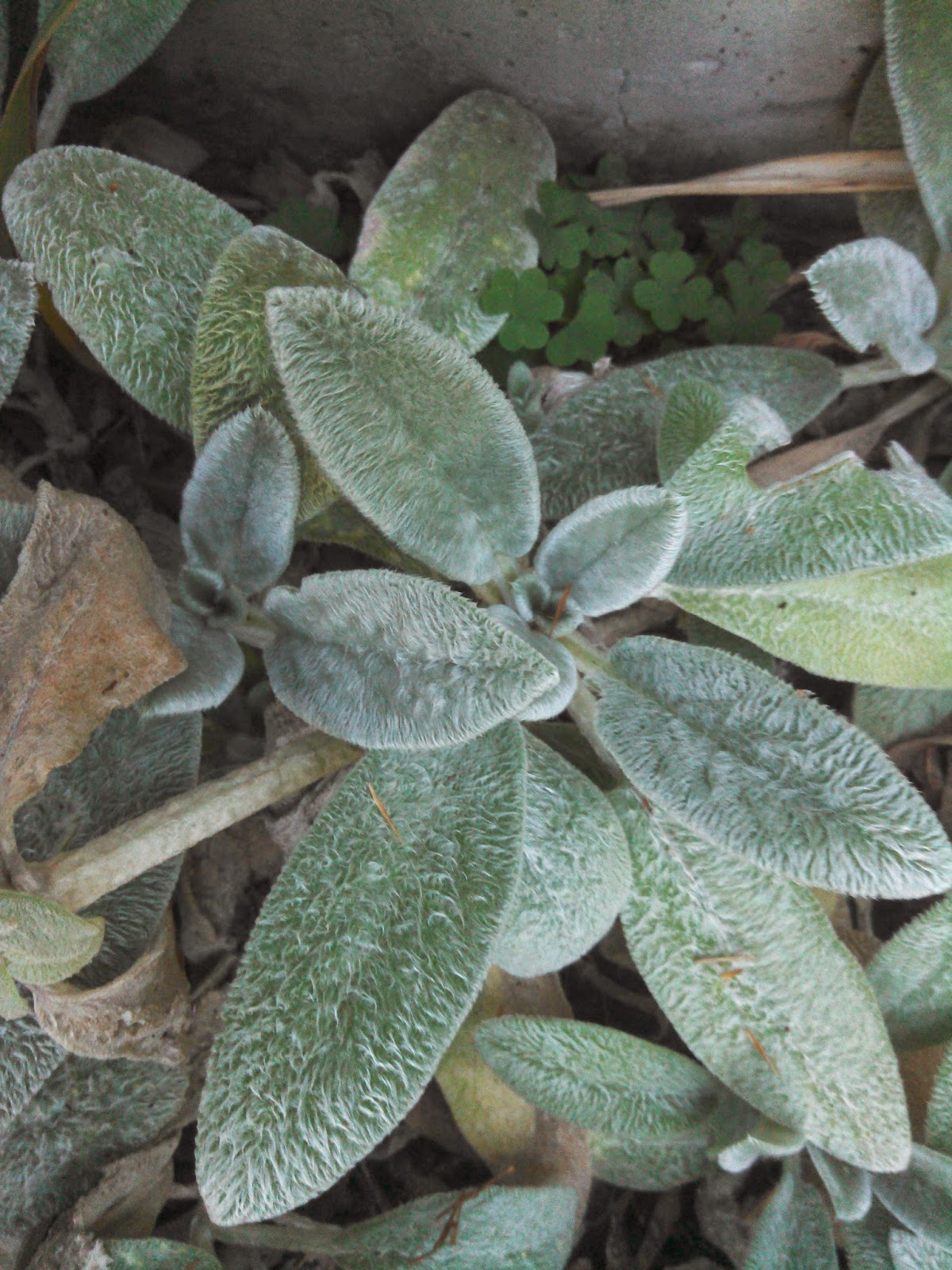 My friend Kathleen gave  me Hen and Chicks when we moved in 15 years ago. We have dozens of hens and chicks now all from the four tiny plans she shared from her garden. 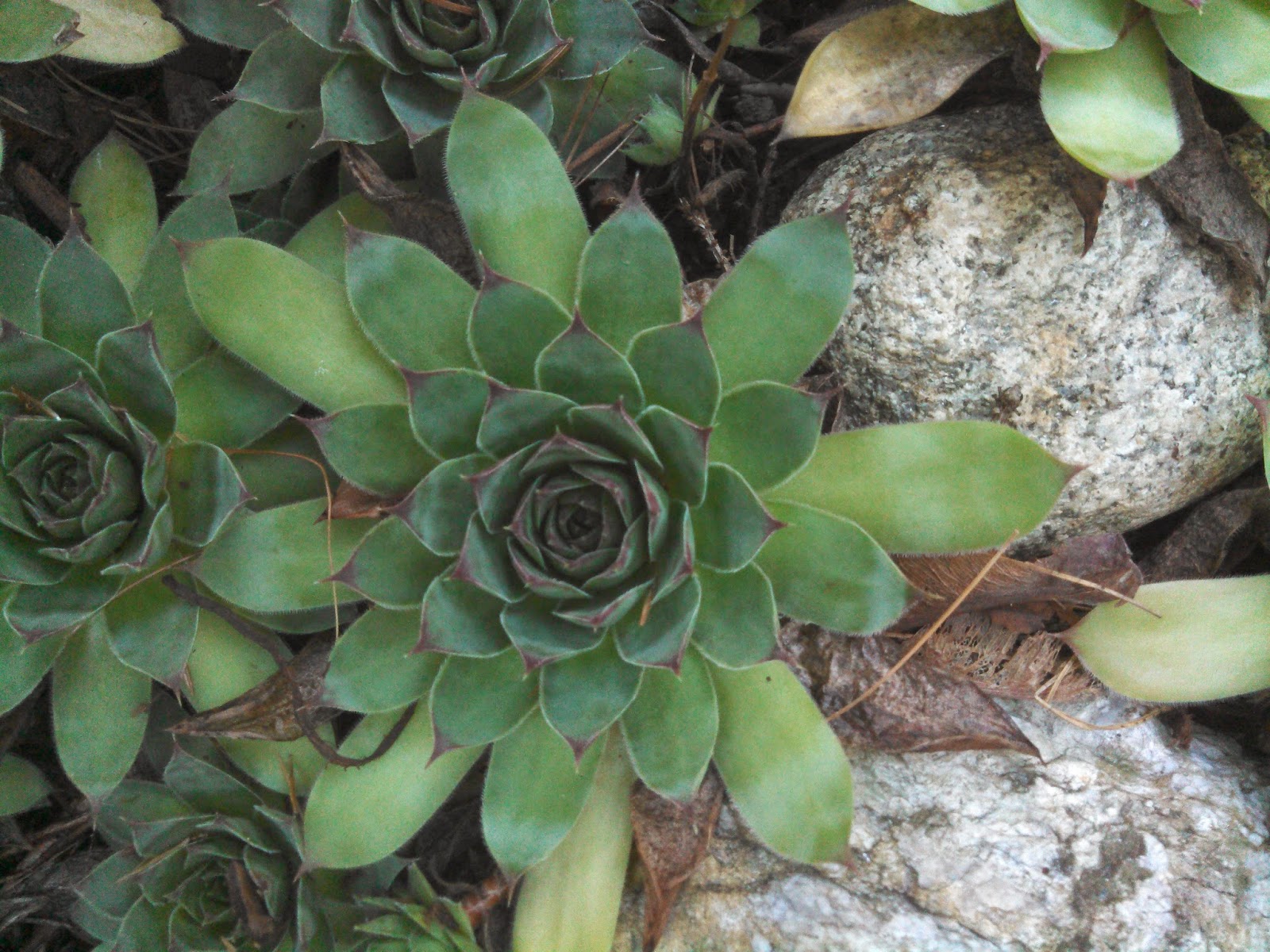 These are my favorite plants in the garden. They were what inspired the garden theme and were the first thing I brought into the gardens here.
Posted by Michele at 5:33 AM 1 comment: 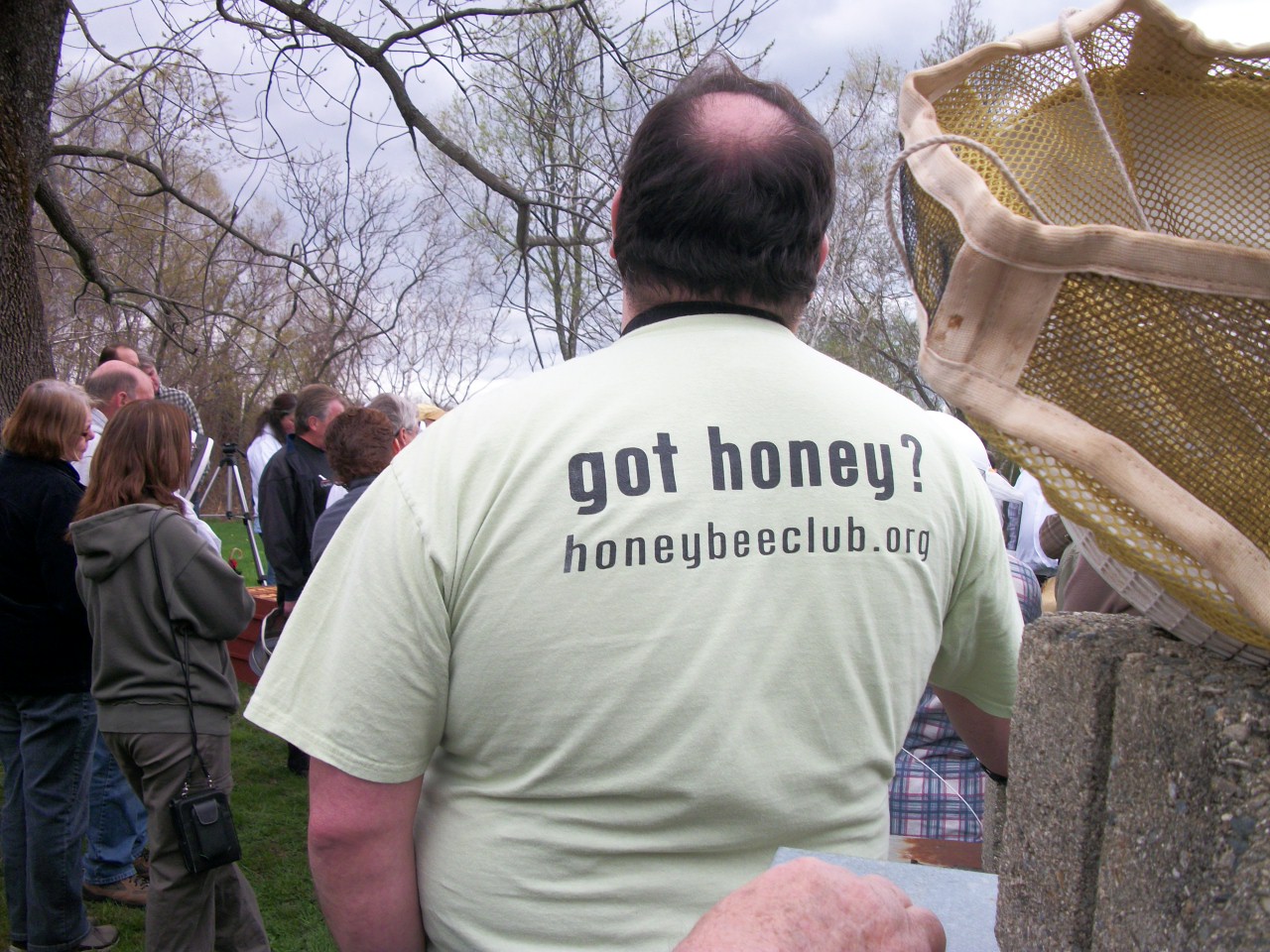 The honey this summer is really lovely. The goldenrod was out a bit early this year and you can taste it in the honey - it is richer than our summer honey usually is. Never fear, you fall honey lovers, there is more on the way...
Posted by Michele at 6:46 PM No comments: 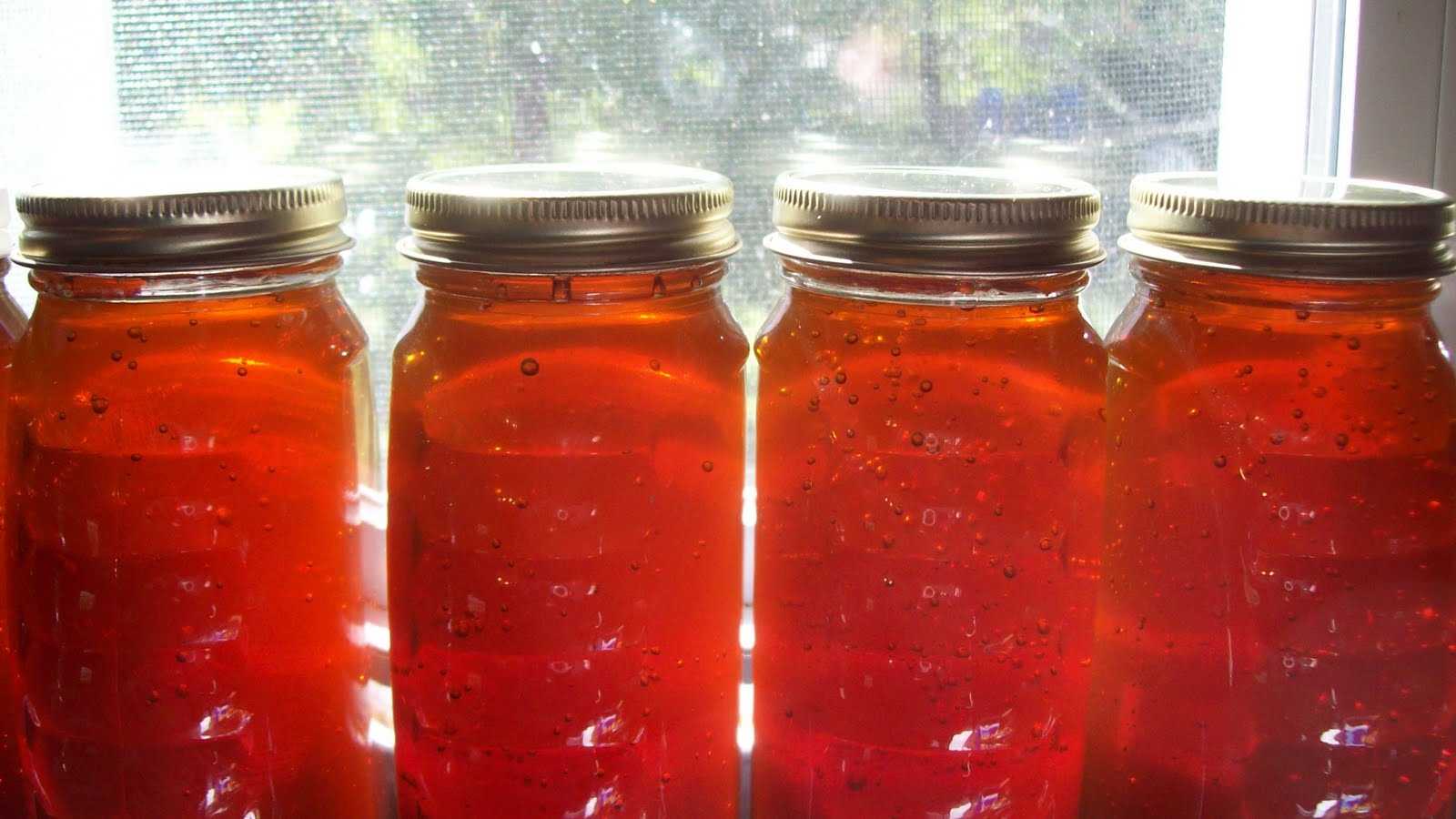 Interested in learning more about honey? I am offering a honey tasting at the Millbury Public Library on Thursday, April 24 at 6:30. We will learn how honey is made, how it is harvested, and taste a variety of honeys from around the world.

Girl Scouts in the bee yard 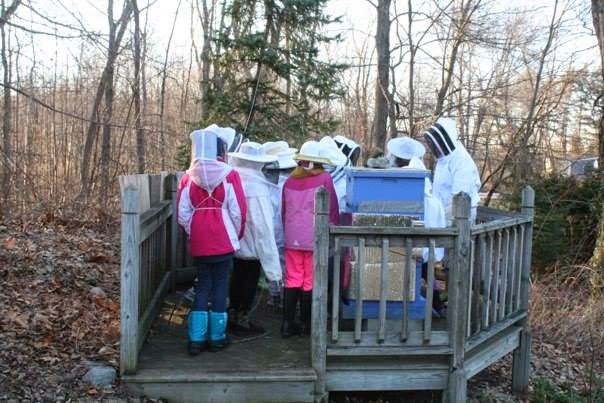 I am so lucky to be involved with an amazing group of girls. My girl scout troop came over to learn about bees and finish the beekeeping badge. This is a photo taken by my GS partner, Kristin Graffeo. She took all the pictures shown here today. These girls, most who had never been near the bees, showed courage and strength in getting this close and letting the bees land on them. Not one, not one girl, had an issue with the bees coming to land and say hi.

We had a great time watching the girls and looking at larvae, eggs, and worker bees. 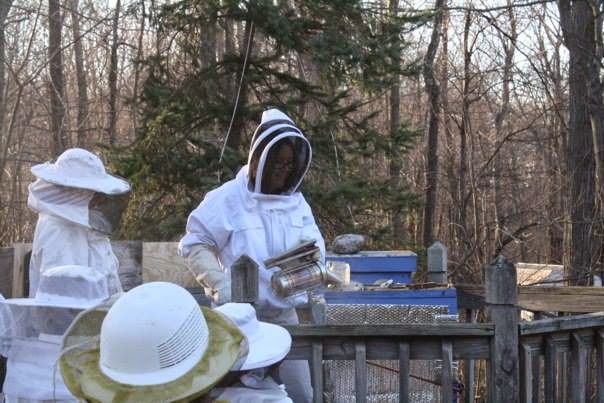 We found one capped drone cell. He still has a week or so to go before emerging, but now there are 11 young midwives, waiting for his impending arrival.

Thanks to all the beekeepers in Millbury who loaned us veils and jackets so we could all have one. That was 11 loans from a lot of beekeepers - love this community!

But truly it is the girls' parents who I need to thank most. All the parents just dropped off their daughters at my house. No one was worried (or at least not worried that much!) about leaving their daughter with me as we explored venomous stinging insects. Thank you for your trust. 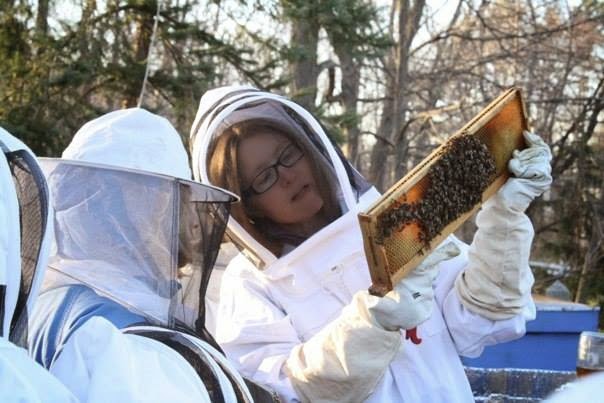 I love this picture Kristin took of me, showing off the capped cells. Thanks for making me look so good!!

Posted by Michele at 9:25 AM No comments: 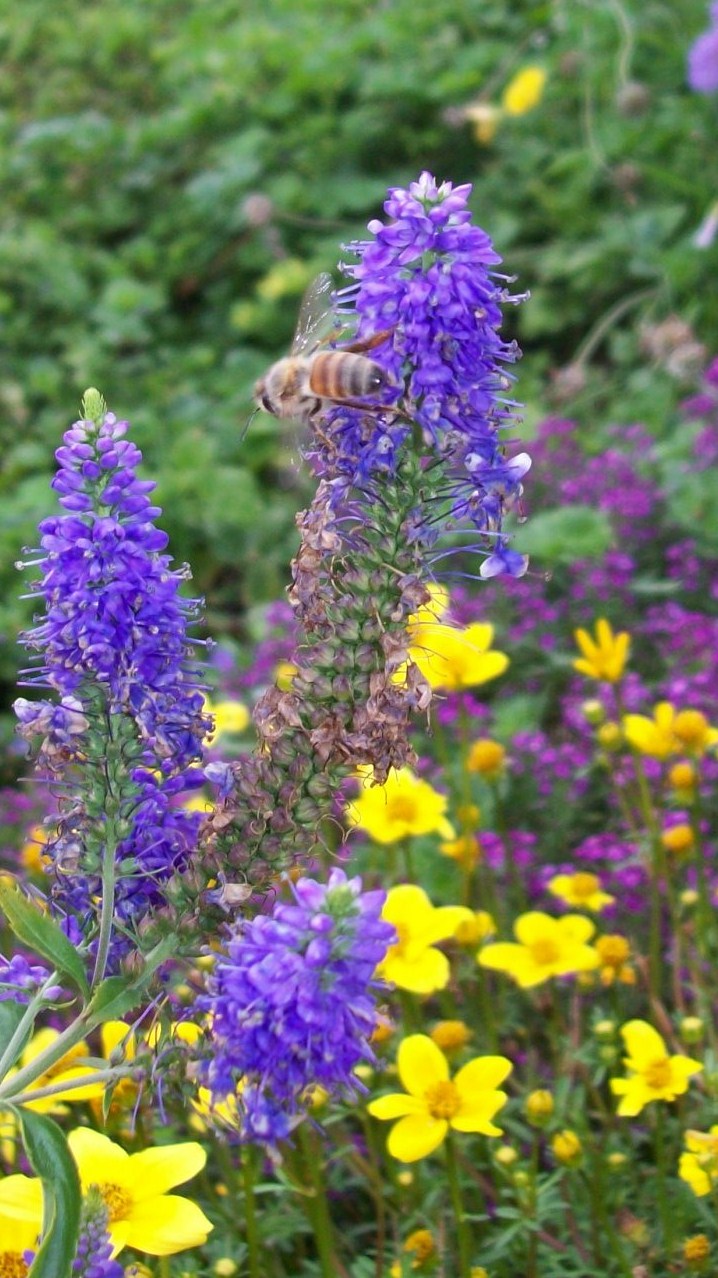 This article came across my desk today from Grit Magazine. Six ways to help the honeybees.

The list is quite similar to my list here on this blog but she suggests letting your lawn go to clover. That is a great suggestion. Bees love clover and it is a rich source of nectar for them. Best yet, it is green even during a dry summer and feels nice on your feet if you are inclined to walk barefoot.

The author also says that if you are going to use pesticides, do it when the bees are in their hives. This is good advice for chemicals that will break down quickly. However, many chemicals won't break down that quickly. Just DON'T use them. Find an organic alternative.

I wish this picture were from my yard, but alas it is not. I took this picture while in Disney Land. Somewhere nearby there are bees and they planted the mostly lovely gardens for pollinators.
Posted by Michele at 5:50 AM No comments:

It's that time of year again where my email box starts showing signs of spring. Citizen Science projects that I've participated in previously are asking for my continued support and data collection.

Citizen Science programs ask lay people to collect data in prescribed manners and return it the lead researcher. This data is used to create a far larger database of information than a single scientist or even research team can collect in a season.

But is this really science?

In part this question comes from my desire to get more people doing science starting at an early age (see my other blog Messy Fingers). When we collect information on clouds, dog poo, or even honeybees, are we really doing science?

Science at its heart is both a verb and a noun. The collecting or describing of lots of stuff or data is really just science as a noun. Citizens are merely collecting bits of information that are fed to someone else. Citizens are not analyzing the information or designing the experiment. Citizens might see themselves as working as scientists, but they don't generally collaborate with the scientists on the structure of a scientific inquiry or the analysis of the data. Perhaps, a citizen scientist may get to watch a presentation of the project they collected data for but they won't be presenting the information themselves.

So, what part is science?

In my mind, none. But don't for a second think that I don't support citizen science in every crazy, tangled, gorgeous way.

Citizen science gets regular folks thinking about science. Curiosity is fed and conversations started. This can lead some citizens to make deeper inquiries and ask richer questions about how data is used, analyzed, and shared. And that is worth the misconception.

So what am I going to do this summer?  I am continuing my role in Firefly Watch, The Great Sunflower Project, and I am going to join in the Lost Ladybug Project. Honestly who doesn't like to catch fireflies on a warm summer night right before bed?

If you want to add data to a project here are a few clearing houses of projects:
Citizen Science Alliance - astronomy and climate projects
Cornell Bird Lab - well bird related projects and great ones for kids
National Wildlife Federation - nature related projects for kids
wikipedia - lists a variety of projects but can be overwhelming so use this if you know what sort of project you want or can't find something anywhere else

We had crazy weather this week. Sunday was nearly 60' and all three hives had bees flying. They took time to do a cleansing flight and pee everywhere. I am still concerned about our weakest hive but so far so good.

Does this mean we are out of the woods and our bees survived the winter?

No. March is typically the hardest  month for bees. The new baby bees are starting to emerge and the overwintering bees are dying out. All that is happening while there is little to no forage. Skunk cabbage will be out in a few weeks but that yields only pollen.