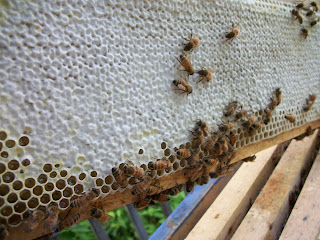 I spent most of my time with Joy's former hive. They have GOBS of honey. This is a frame that is full of honey and almost all of it capped in the top honey super (that's the box). 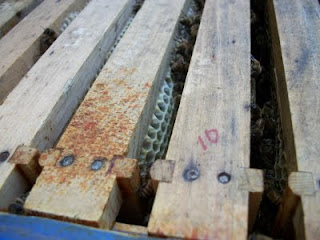 This is looking down on the lower honey super. The bees are still building it out. I run nine frames in a super than can hold ten frames so the bees build out the wax farther out from the frame. This makes it easier to extract. You can see the number 10 on the frame. That frame went into production in 2010 and will be discarded in three or four years. That keeps any pesticide residue down and keeps the bees healthier. 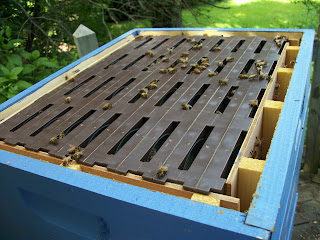 This is our new project for the year: Ross Rounds. These are special frames that the bees build out in circles. There is no wire on the wax so we can just cut it out and sell honey still in the wax. This is very popular in eastern Europe and was common during the depression. I think it may be making the bees a bit testy though and I might be putting it on another hive next week. 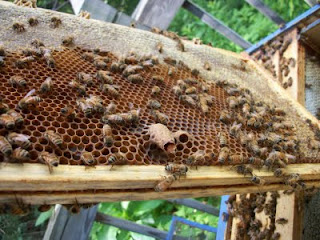 And now for the big Ta Da! This is True's supercedure cell. Yep, that's were True grew to adulthood. I have not seen any eggs yet and she has about a week to get laying. I added a blank frame right next to this so she could find an empty spot to lay into. I can't wait to see what she's like as a queen. I was really hoping that she'd be laying by now.
The bees were really quite jumpy so they are ready for a fabulous queen too. I used a lot of smoke and my new favorite bee-calmer: honey in a spray bottle. I've used that for a while with Sun's hive as they get testy when I smoke them. Nonetheless, yesterday everybody got smoked. I had to refill my smoker three times. While my smoke was long-lasting and gorgeous, I was rather surprised none of my neighbors called the fire dept!
I am so lucky to have great neighbors. Four of my neighbors know we have bees. One house to the north, two to the south and one random neighbor from down the street. When I first had bees (and had those nasty uber-aggressive girls) he used to walk his dog around the pond behind our house. He and his dog would use our path and walk through our yard. Not surprisingly, that stopped! He's stopped to meet the new, kinder and gentler bees but he and his new dog stick to the road now! 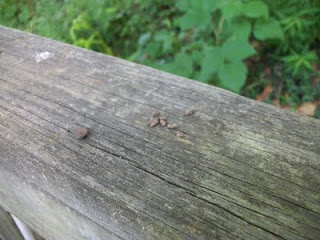 I noticed another animal had been hanging out with the bees. There is a round nail head in the picture and that should give you some scale - but there are half a dozen squirrel poos on the railing. My tracking teacher would be so proud of me for not only finding this but remembering what animal made them!
Posted by Michele at 6:36 AM 1 comment: 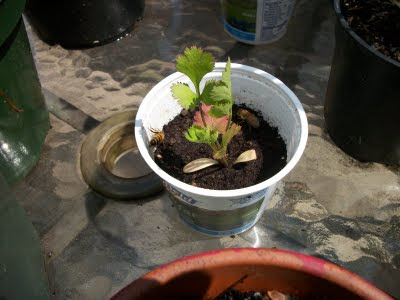 This morning I was puzzled by the sounds of many bees outside my office window. We have been sprouting all sorts of things in pots this year and have quite the container garden going. However, with all the wet weather this spring, nothing has buds let alone flowers, so what were the bees doing?
They were drinking!
Some foragers forage for water and the wet (not damp!) soil in the plants on the deck were a perfect way to get water and not drown. They loved the lettuce plants and were diving down in to the plants but taking a picture of lettuce with a bee under it wasn't going to help.
Posted by Michele at 7:50 AM No comments: 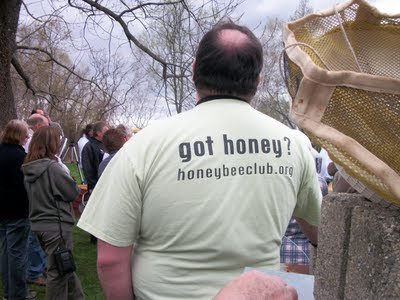 I have one 1 lb jar of honey left at the moment from last year. Let me know if you are interested in purchasing it.
Ah, but what about this year? It is official, there is people honey! Out of three hives, only ONE hive has honey at this point. Sigh. I really had hoped that we'd have more going on by now. But on to the official report.
Ruby's hive is looking quite fine. I am baffled by their insistence of having both swarm cells and a partially constructed supercedure cell, but nothing is happening in either one of them. I saw eggs, but not many in the top box. My husband and kids helped me out by spinning out two frames from the brood chamber and I replaced them. This will give the queen more space to lay eggs. Their two honey supers were empty.
Sun's hive is amazing! What a boatload of bees they have in there. I had put on two honey supers and a ross round super for making honey with the comb still in it. Alas, my best wax makers failed me. I took the ross round super off as well as the queen excluder. They had no honey in the supers, but I gave them a fresh frame to build out and an empty for the queen to start laying in.
True's hive - yes, the new queen is OUT - is doing fantastically! She has to be out as they are much gentler than last time I was in the hive. I didn't mess around in the hive - I will give it one more week and then dive in. But, and this is the amazing part, there is honey in the supers. Yes, we have HONEY! I gave them the ross round super just to see. They are slow wax builders so it might not work this year, but I have high hopes.
Yay!!
Posted by Michele at 7:26 AM No comments: