prose and a new queen 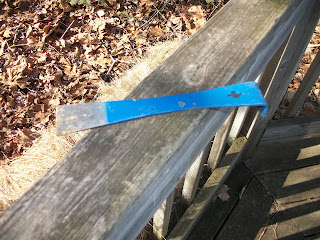 Working the bees is generally poetry to me. The smell of the bees and their wax, the hum of their work, the zen rhythm of our movements together...

I took down the dead colony and cleaned the hive. The weather was cool and the work was dirty. You wouldn't think the dead insects would be so grimy but it was. I cleaned each frame of any excess wax and propolis rendering my hive tool a mess and gloves no better. Soon sweat and blood added to the earthy mix.

The bees in the other colony did not seem to care about my presence so close to their home or perhaps it was smell of dead bees that held them at bay. Regardless, when I took off my gloves, I didn't worry about getting stung.

It was easier anyway. I pulled the dead bees from the cells with my finger nails until I had added bee guts to my smear of filth covering my hands and hive tool. The veil soon followed so I could look for the queen in the mass of dead bees at the base of the bottom box.

She was never found, but easily could have been there. The pile was much bigger and deeper than I originally suspected.

So the hive boxes are cleaned and ready to go when I can get a queen from the remaining colony.

Those bees seemed to sense the need for a queen even it isn't exactly in their own hive. Their queen is laying beautifully - while she remains enigmatic, her eggs and larvae are abundantly evident. Along with a supercedure cell. If they make more than one, I will be ready to requeen shortly.