All Hail the New Queen

Without a queen in Pink's hive, thing were going to get ugly. I needed to get a queen and get a queen fast. Luck was with me when George O'Neil of Autumn Morning Farms had a New England breed queen available. He delivered this package to Mary Duane, my friend and mentor. 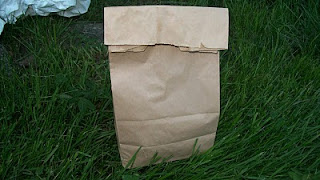 Mary works at a high school and the kids took a look at the bees under the 'scope. All the wings, legs and other bits were intact. 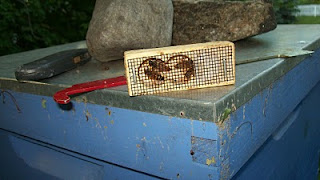 This is a picture of her before I set her in the new hive. She is at the top of her queen cage with a worker just under her. You can see how a young queen is very similar in size to a worker. The more eggs she lays, the bigger she will get. 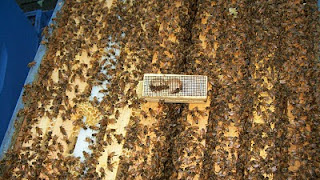 I carefully placed her queen cage on top of the bees to gage their reaction. I was looking for curiosity and not aggression. If they became aggressive that would imply there was already a queen and either she's a virgin or she's just returned from her mating flight. Either one of these scenarios would explain the lack of eggs. 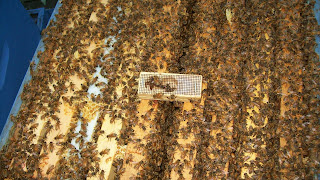 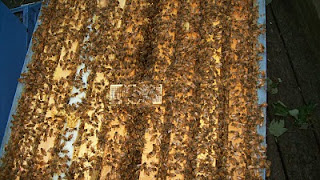 really curious...
and before I could snap another picture, they covered her cage, I put down the camera, and grabbed her! My fear was that they were going to ball her. Essentially that means the bees cover her cage and suffocate her.
I made a quick call to Mary who came over. We enacted the same steps and then Mary (my expert!) called Ken Warchol (our local bee inspector and her expert!). Ken had a great suggestion - put her in the hive for two days but leave her cage so that the bees cannot release her or harm her. Reassess at that point and remove her if they are aggressive toward her or release her if they are calm.
Having a plan helped me relax. Having Mary there helped too. We watched the bees' behavior and they seemed focused but not aggressive.
I have a good feeling.
And a name for her. I'll tell ya in two days if she makes it.