What Beekeepers get for Christmas

Every year in January I lament not going out to the hives in December to give the bees some bee candy. Usually by the time January rolls around temperatures are too low to really keep the hives open for more than a few seconds to slip in the disk of hard sugar.

This year we got a wonderful gift of a day that was near 70' and we remembered to go into the hives! And this was right before Christmas too. Bonus!  My DH and I suited up as bees disturbed this time of year are unpredictable.

Cerulean's hive is looking just fine. We are most concerned about these girls as they are the weakest. They were a sweet and gentle as ever.

Star's (daughter of Sunshine) is doing amazingly well. They built wax- yes, you read that right, they had built wax, which is a most unusual task for bees this time of year. When I opened up the hive to slip in the sugar disk, I ran into some wax comb that wasn't there early November. I hadn't opened up the hive that far since, so they've been busy. This meant that the whole top of the hive had to come apart. Their honey super is nearly empty but the hive is still hefty. These girls did  not like having their hive disturbed and flew all over he place. They settled quickly - whew!

Astrid's hive is doing quite well. They are just as gentle as ever. I am concerned that there is a gap in their hive. I've tried covering the gap with duct tape (my favorite fix-it in the apiary) but it won't stick well on the outside of the hive this time of year. I am open to suggestions. 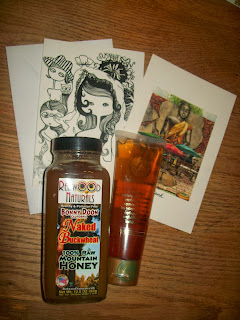 This was one of the other fun gifts I received for Christmas. I have a friend who travels a lot and he got me honey from south Asia and some buckwheat honey. I love the packaging on the honey that looks like a tube of lotion. What a clever idea. The honey came with two beautiful cards that were hand drawn.

Hope everyone has a sweet New Year!
Go bees!!
Posted by Michele at 8:08 AM