All hail the new queen 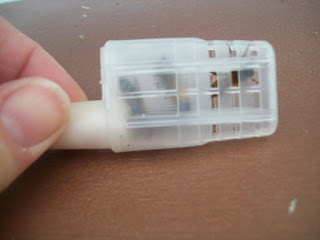 Now that isn't much to see, but that is the new queen. I've never used this kind of queen cage before but it works in a similar way to the wooden ones. I am holding the sugar plug that the bees will eat out to release her. 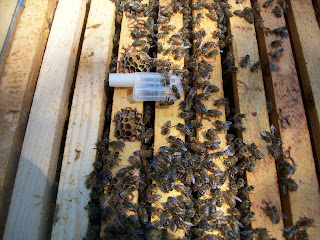 I put her on top of bees I stole from Serendipity. More on that in a minute. I put in three frames of brood and the nurse bees. Since we were down a hive, I had a few frames of honey and pollen already so she is starting with quite a nice stash of resources.

We've been debating on what to call her. My daughter says Blue. My son says name her after an Amazon queen. What do you say?

Serendipity has been a busy girl. There is a LOT of brood in her hive and she's laying in both the top and bottom supers in good quantity. I am concerned that there is a bit of patchiness to her pattern and that could mean that the bees are going to supercede her. I did find a supercedure cell but it was dry. I also found a ton of queen cups or "we are thinking we might swarm but we aren't sure" cells along the bottom. These bees are really going strong and they are not sure where to go.

Taking the frames of bees and brood should give them more room for babies and over the next few weeks they can make a decision about their queen.

Sunshine is doing nicely. She is laying in her usual upside down pattern typical of her and her mother. If this pattern plays out as in the past, we only have a few more weeks of this craziness.