Five days later, I get a call from the fabulous Rob who is off at some family function. He had gotten a call from the police that someone had reported another swarm. Did I want them, he asked.

Well, OF COURSE! It is just me this time and my wonderful handy husband screwed some wooden ware together for me so it would be easier to manipulate alone and off  I go - me, a box, brush cutters and LOTS of bungee cords.

The address I was given must give the postal carrier heartburn. There are two houses with the same number on that street. So here I am, in full bee gear, knocking on the wrong door. Friend to bees and nice person she was, she directed me to the bees. I see a few small balls of bees - hardly worth coming over for. Nonetheless, I gather these poor girls.

Then the other family at that house number, but in a different house, came to see what was going on. They had been the ones to call. As I am ambling over to say hello, I pass a ball of bees about the size of a basketball. Oh, THOSE are the bees!

They had been up in a tree, but thankfully had fallen. Into a brush pile. On a down hill slope. It took a while to get all the bees. It was like a giant game of pick up sticks. I had to cut the branches into little sections and carry them to the box. Shake the bees in and I stacked the brush next to the box.

Once I had the queen, the bees settled a lot. It took about an hour from start to finish. I bungeed the hive in the back of the truck and drove home slowly chuckling to myself. If only the guy in the red truck behind me knew why I was driving slowly, he probably wouldn't have tailgated me.

So now we have three hives and it will take some time to readjust the bee-deck to accommodate all three. In the mean time, here is the set up. 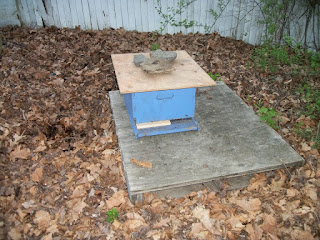 The new queen - is Serendipity.
Posted by Michele at 11:27 AM