Quality time with the bees 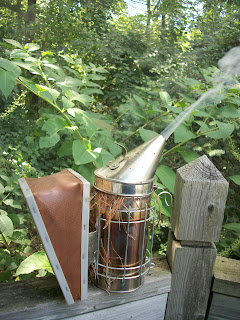 I spent nearly three hours with the bees today. I had to refill my smoker twice, but it stayed lit! I feel like I haven't really spent a lot of time with the bees this summer - life has just gotten in the way and I have been more of a bee-haver than a beekeeper. This is just not how I want to live my life - keeping bees just helps to keep me in a good place.
We are experiencing a dearth right now. This means that there are very very few plants with nectar and pollen. Leave the clover in your lawn if you can.
Soo what's happening in the hives, you wonder and how about that honey...
Well, Sun's hive is just fabulous. There are gobs of bees and they are working to fill the four honey supers on there. I way over did it and they would be fine with three, but had the extra one and they are working it. They don't have a lot of pollen, which is a concern. She has a great laying pattern.
While I was working the colony, I had it open for a while. We got an unexpected visitor. Look on the bottom of the picture on the edge of the box. A bumble bee flew in and walked down in the frames. I was so surprised. She actually went down on a frame and only popped out a few moments later. The honeybees just ignored her. Magenta's hive is doing well. They aren't putting up much honey but that is fine. There was a good amount of larvae but once again, not quite as much pollen as I would like to see. I took a couple of frames of honey from them.
True's hive is a hot mess. They are once again superceding. This is not an emergency supercedure - there are four cells that I could fine and they all are pretty big. Only three have larvae in them. If you look carefully you can see one of the princess in the top most cell - there is a blob of white. That blob is a combination of the larva and the royal jelly they are feeding her. She is positively swimming which means that they are doing well as a colony. 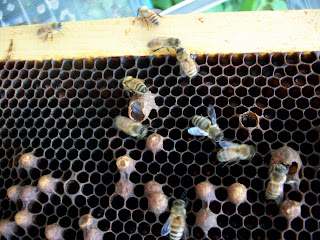 The other things on the frame that look like bullets are drone cells. Drones are bigger than worker bees so their cells stick out a bit.
Strangely enough, these bees were really calm even though I had to take their hive down nearly to the bottom board. They have some honey put up but I didn't take any yet.
I am going to try and get honey extracted for the fair again this year. I will be defending champ and there are no duplicate names on the trophy I have. My expectations are quite low since I am extracting quite late, but we shall see.
Posted by Michele at 3:48 PM