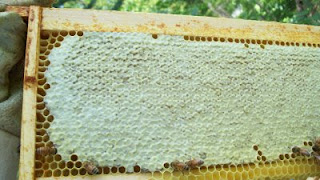 Hope's girls have been busy. I put an extra honey super on before I left. Honey supers are where bees store people honey. One super is nearly full and the other two are well on their way to full. I must say, I love the way a hive looks with three honey supers on it - nice and tall. The supers are heavy - I use small supers for that very reason. A small super is easier to lift when full weighing in at around 25 or more pounds.
The white on the frame is the caps wax on the honey. This keeps the moisture content perfect - about 17% moisture. If the honey is wetter it can mold (YECK) and if less than 14% it will crystalize.
The wax is white because the bees don't walk on it much so it stays nice and clean. Just like kids, bees track in all sorts of junk - whatever they walk in outside, they leave on the floor or wax.
And now for the bad news: 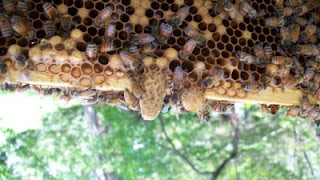 Hope is leaving.
This is a capped swarm cell and one of three capped queens I found. These girls were quick. Before I left there wasn't so much as a queen cup - the beginnings of the queen cell. They must have worked quickly during the wet weather. Just like the rest of us, they got squirrely being cooped up inside.

This was the largest queen cell of the bunch so I am guessing this is the one the workers want to have be the new queen. So even tho this was not a supercedure where the bees are unhappy with the queen, we are still without new eggs or small larvae.
So this is what the top of the hive looks like: 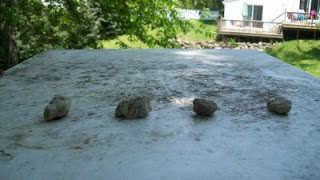 We have a four week window in which to see small larvae or eggs. If we don't then it will be a time to get a new queen or more likely, I will combine hives.
If I were going to be around, I could use these other queen cells to make new hives, but we are really full with three hives. I hope to expand next year if, and it is a big IF, we can make it over the winter. I know it is so strange to be thinking about winter while wearing sunscreen and shorts, but if don't work like a bee now, then we won't have bees next year.
Sigh. I am so sad to be Hopeless.