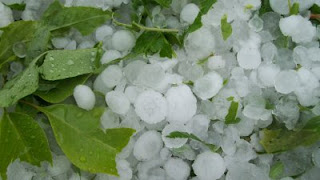 Yesterday we had a micro burst hail storm. First the sky darkened. My daughter and I were out in the garden finishing up some planting and we noticed the bees were -all- going into their hives. This is generally a sign of rain, so we heeded their warning and put our car away before venturing inside to clean ourselves up. We showered and started dinner on the grill.
It started to sprinkle at this point, but we weren't worried. Then the thunder started. We tried counting just how far the lightning was from us, but didn't even get the word "one" out before the lightning struck. The storm was upon 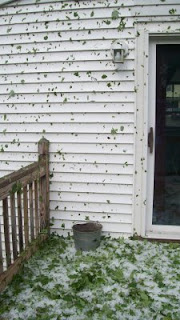 us.
Moments later the hail started. I was excited at first. I showed it to my daughter knowing this is a fairly uncommon event in New England. I am an air force brat and lived in the midwest for a while. I've seen many hail storms.
We closed windows and watched anxiously for "our boys" and my girl calls her dad and big brother. They were on their way home but the sky was awfully black.
The hail stones were getting larger. Some stones were the size of golf balls and were sounding like rocks on the windows and the glass doors.

In the end, after 20 minutes of a freight train trailing through our living room, the storm ended. And we were left with trees without leaves because they were plastered to our house, about three inc 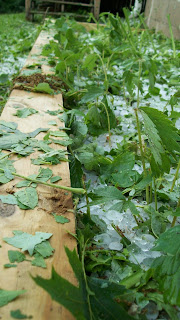 hes of hail stones in our yard, and a garden that was shredded.

We had planted our modest gardens fairly tightly with squash, eggplant, tomatoes, kale, spinach, lettuce and more. Just yesterday we had our first spinach salad and were planning on more today.
Today we spend all day, not paddling on quiet rivers as planned, but raking, hauling, and just looking sadly at the fury of a 20 minute storm. Less than a third of our garden survived.
Earlier in the afternoon I'd worked with the bees. I was able to put people honey super on a hive. This is Hope's hive and once again, she was the bright spot in my day. And the end of the day, I had three inches of ice everywhere, no screen, chipped siding, a shredded garden, and Hope.