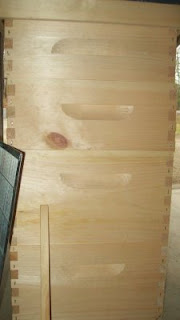 A couple of weeks ago at the April meeting of the Worcester County Beekeeper's Association, I won a hive. I won the entire hive down to the bees.
The donor of the hive and bees is George O'Neil of Autumn Morning Farms. The donation was in gratitude for the help the WCBA members have given him as he's retired from the military and started his new endeavor.
He was amazing. No one knew what their mysterious red raffle tickets were for, but he insisted that we all have one. He was really excited about the unknown prize and drew out the process of picking and announcing the winner. Clearly he was having fun.
First he called out the three numbers everyone had on their ticket. Then he called "6" only to be met with groans. Then he called out another "6" and said the prize was for a hive. Everyone got excited, especially at my table - we all had all the numbers so far. Then George pause and said he would throw in a package of bees as well. He called a "5" and my companion next to me lamented that he was merely one number off.
Then, after a few more seconds, it started to sink in that it was MY number! Yay for me - a new hive, new frames, and new bees. George was tickled - partially at my utter shock and partially that he was the joyful cause of it!
Still stunned, I loaded the new equipment in to my car in the pouring rain and rehearsed just how I was going to tell my sweetheart that we were getting a new colony of bees.
Thanks George, not just for the bees, but for the reminder of just how good it feels to give. When our hands are open to give, they are also open to recieve. I hope the universe is gives you something wonderous.